Alright, I’ll admit I’ve been piping on about Nemesis in a fair few posts. But I’ve been excited for it; the horror and atmosphere it promised in its campaign… The hopelessness more than anything; that impending doom and disaster feeling whilst you continue to try. Admit it, there’s no better feeling that snatching victory from the jaws of defeat! And of course, this game allowed for both cooperative and competitive play simultaneously, meaning I could both win and beat everyone else through lies and deceit. Perfect! But I’m a sore loser.. Overly competitive even, and knowing that everyone else was trying to both aid and deceive me was too much when learning a game as heavy as this.. so my partner and I played fully cooperative.

We had a practice round, getting used to the mechanics with me as the Captain and her as the scientist. It was all going swimmingly, understanding the rules and getting used to how rounds worked. Then we had our first encounter.. 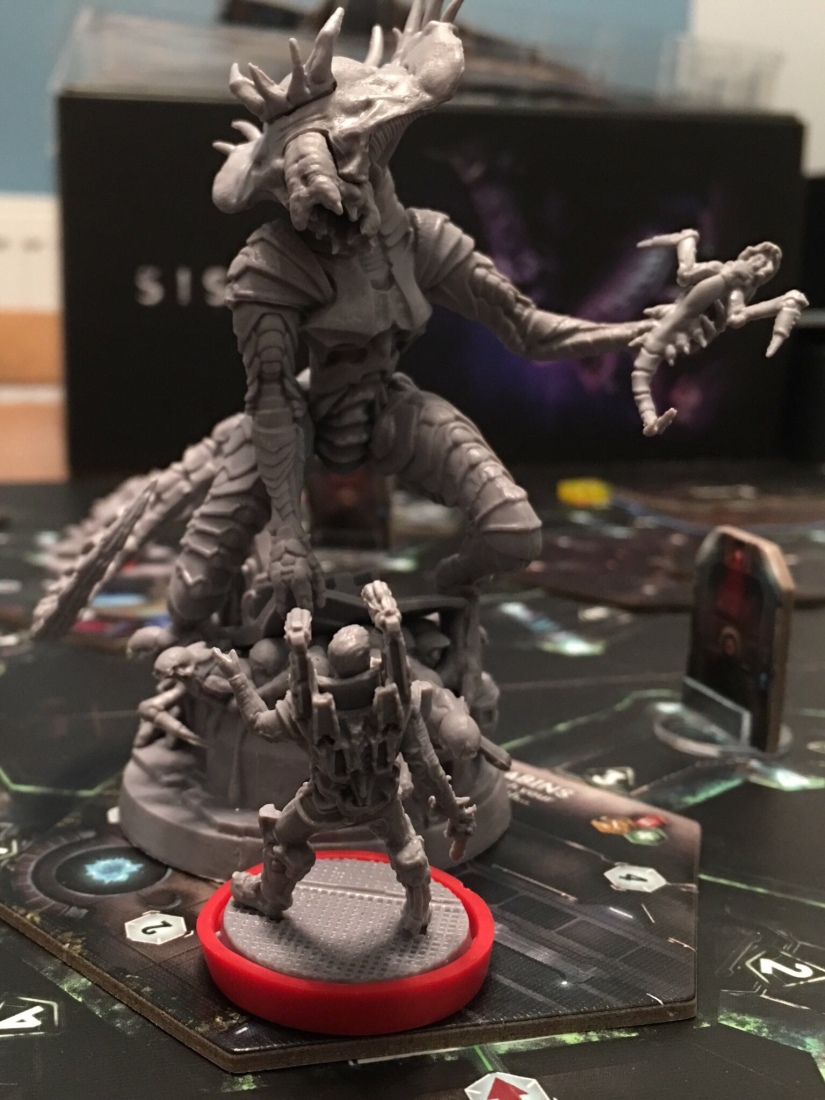 Naturally mine was the Queen right off the bat. Needless to say, even though we didn’t finish that game, it was a steep learning curve. So we left it set up for the next day.

The second game, the first one we finished, was greatly different. It gave us a very good feel for everything that can and will go wrong! From fires to malfunctioning rooms to engine failures to just being overrun by every being in the cosmos. And we had it pretty easy! The thing we found was that every action we took had a consequence, very rarely were we allowed to do something freely without the game taking something away or edging us closer towards our inevitable fates. Rather than me dictate everything we did as a player, I think it’d be more interesting to narrate it from my characters perspective. (That was I can avoid massive spoilers for those yet to play!)

We awoke from cryogenic hibernation, feeling pretty groggy. No one knew why they were on the ship anymore and they weren’t going to divulge such intel either. Only two of us survived the freeze; the brainiacs knew it was risky but sent us anyway. It was me and the scientist. As the highest ranking officer alive I took control immediately, opening up the heavily redacted transcripts on the terminal so I could establish the situation, and I saw how damned we all were. Engine status was unavailable, there was wide spread damage across the whole of the hull, life signs were minimal and erratic, and we had no way of telling where the ship was headed. The scientist started to come around slowly, but was quickly grasping the severity of the situation. She panicked and began to question what she was even meant to do. Feeling calm, I explained that HQ needed us to send a signal to Earth and remove whatever it was that was causing the problem, even if that meant destroying the ship. She then chirped in with a completely different tone, explaining that whatever had caused this mess had to be alien and that she needed to take a sample back to HQ. I didn’t argue; I thought it was a risk but I didn’t want to get rid of any allies I still had alive. We decided to split up.

I left cryo and headed for the cabins, hoping to find something useful; ammo, a health pack or something I could use to make something more helpful… no luck! I continued on anyway, ominous noises following me as I went until I found the engines. I took a rest to check myself over and looked over what it was I was needing to do… If I wanted to blow the ship up I’d need to find the generator room to overload it, or I’d need a key to do it remotely but I doubted whether I’d find one in this hellhole. The ship was a maze and a web of changing and intertwining corridors. I knew them all so well once before but the cryo messes with your head, changing memories every time you use it. The scientist appeared on a terminal in the room, she wasn’t looking so good. A fire had broken out in the surgery and was out of control! I ordered her to get out of there before she fried. We decided that separately hunting for resources and items was no use, we needed to both find the escape pods and, if we couldn’t destroy the ship, at least get rid of the source of whatever the hell caused this mess. The noises followed us still as we worked or way to engine 1, the tension was incredible and the ship was in an unbelievably bad state with most rooms malfunctioning badly and doors locking behind us. If we weren’t already scared we were then.

As I entered engine room 1 I head noises all around me. This was different than before, bigger, closer. I felt like a cornered rat in a maze. Things couldn’t have been more tense until I heard a large explosion come from the other side of the ship. I thought that was it, that the hull had breached and we were going space side! Luckily it wasn’t that bad, but it was still urgent; the fire in the surgery had spread to the ED, engine 3, the monitoring room and one other room that we hadn’t yet been to. Hull integrity was failing, it was uncontrollable and was spreading. Once the scientist and I had reconvened, we decided to look for the fire suppression systems; even if we couldn’t get rid of it all we could at least stop it spreading. This was the last thought we had before the spooks started showing up. Another noise from the maintenance corridor and then it emerged; a being with an insatiable look of hunger, as tall as two men and as vicious as a cornered rat. It’s not possible to describe the horror, but know that its looks will haunt our nightmares. The beast entered the room we were in from behind and immediately set upon us, swiping at our vitals. It knew how to kill us. We knew nothing. Like rookies we opened fire, shot after shot, each time the beast reeling in pain and screeching like a banshee; if there were more of these demons on board they now knew where we were. A final round from my revolver and it dropped dead. We hadn’t had time to think and had possibly wasted ammo, but we were alive. As a soldier, I couldn’t not know what the enemy was hiding. I decided I needed to find out what on god’s green Earth these things were and how to kill them. I took the corpse and began looking for a science station to investigate, see if I couldn’t find a weakness to exploit.

We carried on along the left hand side of the ship continuing towards the cockpit, desperately trying not to attract anymore attention.. Then we found it; a huge, pulsing mound of green flesh with glowing orbs. Things writhed and wriggled inside the orbs, whatever it was was alive and stirring. We had no intention of sticking around or letting them hatch, so we began destroying them as quickly as we could. The scientist, being of logic and understanding, chose to take one for investigation. She said she needed to take one with her, be it into cryo again or on an escape pod. I didn’t care so long as I didn’t have to touch it. Scientists right? The moment it was safely in her storage pack another noise, the same as before. The noise all around us. An intruder in all its hideousness stood before us. As tall and ugly as the previous one, but more threatening like it knew what the scientist was doing. Something inside of her must have told her to act, and she did, shooting the being right in the head. This time the beast fled out of the green amalgamated mess of a room, whatever she had done spooked them. Instinctively I wanted to give chase; remove the risk, but I chose survival over that and continued with the scientist.

We eventually got to an escape pod unlocking station and we did just that. We now had an escape, but we needed to signal HQ and also had to be sure the beings were dead, we couldn’t let them get back to Earth! We unlocked the pod and continued, eventually getting through the canteen and finally ending up at the fire suppression systems. We took a deserved rest, not a long one, but a needed one. After we had removed most of the fire we set to work finding the second escape pod station, we needed to ensure we could escape no matter what, so we split up. We couldn’t have had much more of the ship to investigate! I looked around and began heading back to the green room, I wanted to ensure the menacing orbs were thoroughly destroyed in case we couldn’t destroy the ship. The scientist’s journey was far different. She found the escape pods, but had clearly upset the beings by taking the pulsing orb, and two set upon her. As she tells it, the one she shot went for her legs and tore into her, and he other bit down hard on her shoulder. Although she survived and escaped, I don’t think she could bare to tell the whole of what happened nor discuss the pain. Perhaps talking about it brought it back? It doesn’t matter now anyway. We met again in the original escape pods, hoping to escape together. I then realised I hadn’t checked the destination! I ordered the scientist to sit still, not to move until I had returned so we could both escape, but the pain must have been too much. I’ll admit her injuries were severe, but of no excuse to abandon her commanding officer. I heard the escape pod launch with a heart wrenching clunk, as the beasts must have too. When I returned she had gone. I was alone now with only one means of escape. I too was now running out of time, the ship was guaranteed to go into hyperdrive soon to meet its destination and I needed to not be here when it did. I left quickly and began heading back towards the second escape pods, but it was futile. I was met with two of the beasts. There was no way I could fight them, nor could I launch the pod with the risk of them following me. The survival of the colony was more important than anything else. I had to let HQ know what had happened. I grabbed my smoke grenade, left the beings and headed for the comms room. The rest of the journey up to now was a blur, I know I sent the signal and then headed for the cryogenics chamber. Even if I wasn’t going to survive I didn’t fancy becoming a fine paste through powerful G-Force. I know my fate is sealed as I wait for cryo to sink in, and I hear the beasts clawing at the doors. All I can do is pray that the engines fail and the ship, along with all those demons, is destroyed. I don’t blame the scientist, I would have done the same.