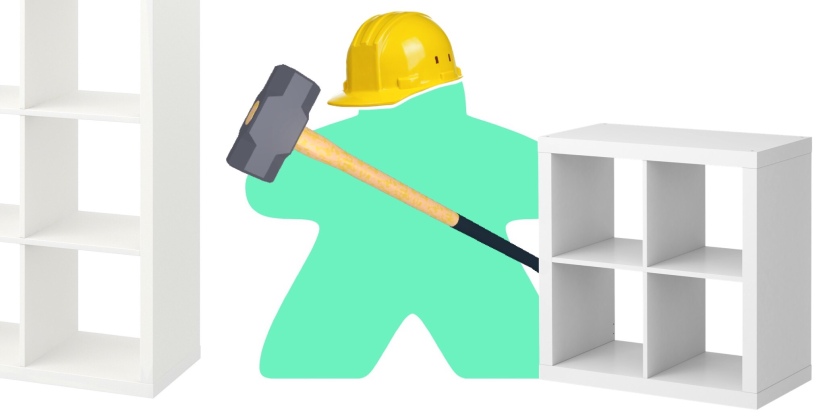 I’m a massive advocate of showing off a collection of games, mostly in the hopes that someone will see that and want to play, and it’s a big thing for me personally too! In my home I have most my games on show, though they are stored sensibly and in somewhat of an organised fashion. However it was completely different for me some time ago; I’m ashamed to say that only in the last 5 years have I been a true enthusiast, prior to this I would shy away from the fact I enjoyed tabletop gaming like it was something that was frowned upon. This, alongside other factors in my life at the time, may have been the reason I only started owning games in the years after this, despite the fact I have been gaming for a good 12+ years! But yeah, showing the games off and having them visible means a lot to me… that being said, I have a lot of games currently. And I mean a lot… Maybe not as many as some enthusiasts who have 4 rows of Kallax filled to the brim with every variation of Dominion, all editions of Eldritch and Arkham Horror, and every copy of Pandemic imaginable, but a lot. But anyway, time for a storage horror story!

Previously, I used to store all my games above my wardrobe; hidden from sight and invisible. I didn’t see this as acceptable once I’d fully settled into my home, considering I’d become a proud enthusiast and wanted to show them off, so I bought some cheap storage and moved them. That was possibly the worst thing I did. The storage wasn’t an issue at all to be honest, it was hard wearing and pretty sturdy. I moved them so they were just off the floor, normally not an issue, until we had a leak! It wasn’t a massive amount of water, and it was found quick enough, but as a boardgamer it was my worst nightmare. Devastated didn’t quite cover how I felt! Only a few games damaged but they were rendered unplayable nonetheless. The most frustrating being Zombie Tower 3D which my partner adored, especially since I can’t find it for sale anywhere! Since then I went to Ikea with the determination to get the stereotypical Kallax option. But I honestly thought it was pretty ugly compared to some of the alternatives available! I think Ikea is brilliant for allowing you to make your own storage, and the Kallax is almost a means to an end; lazy storage. Now I’m not claiming my storage is an interior designers idea of a good night in, nor is it as storage efficient as some, but I’d at least claim it looks good in my front room!

But the point to these rambles; I need more storage. Less storage solutions and more an addition of my current storage, which is again why I like Ikea’s choices. The ability to just buy an extension to the storage is fantastic as it still at least fits the set theme and style of what was chosen. But it’s now left me with questions.. How many games will it be before I once again need more storage? And will I eventually resort to the classic Kallax solution? From what I’ve seen of other boardgamers’ collections, Kallax is what’s coming!