This review is also lovingly available on Zatu here!

Maki Staki by Ginger Fox games is all about stacking sushi. And sushi is something everyone should try at least once in their life, and yet everyone’s reaction to it is an instant no! Something about raw fish and whatnot. Anyway! Maki Staki is a game all about sushi stacking and making delicious seaweed rolls filled with a single flavour! Maki Staki is a quick filler game for 3-6 players and is designed to be over and done with very promptly, allowing for more plays and a speedy turn around! 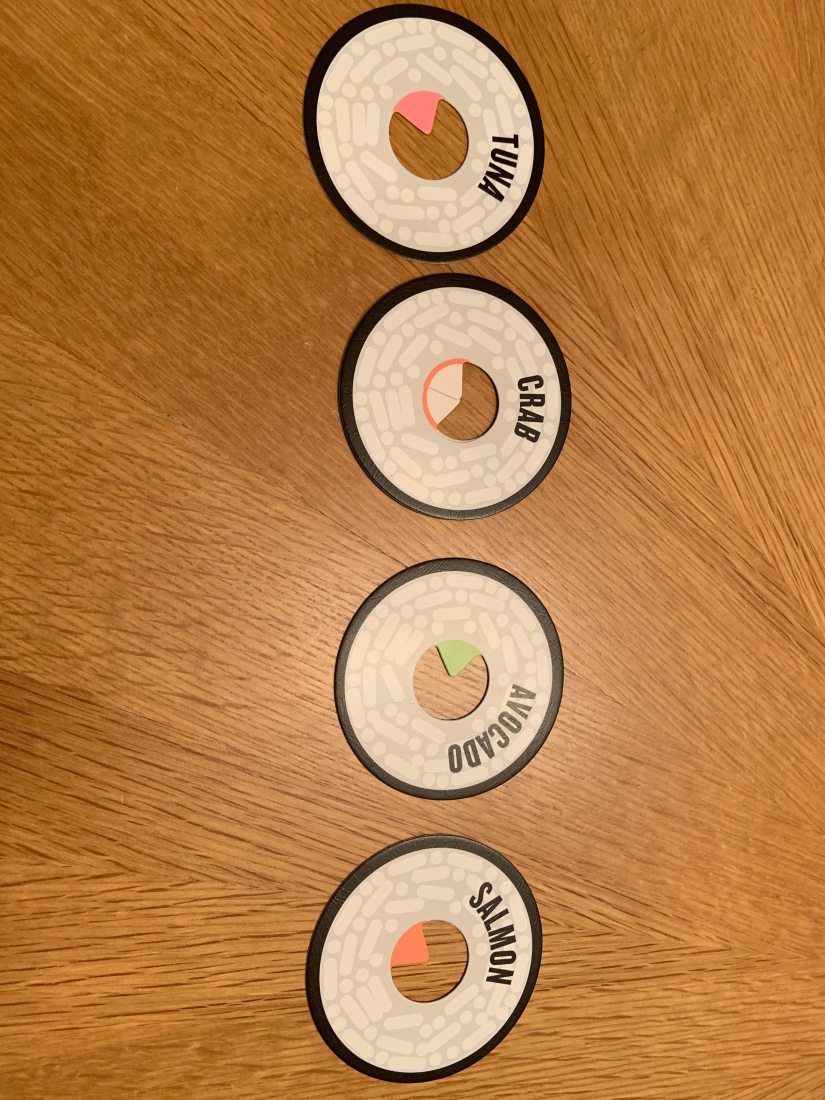 The aim of the game is to complete a sushi roll of one filling by collecting 5 fifths of that stack. You can make stacks of Tuna, Salmon, Crab, Cucumber, Tofu or Avacado (however the flavour filling doesn’t actually contribute to the overall experience!). Players are all dealt random Maki cards to make up their hand, these are visible to all players. Then, starting with whoever last dared to eat Sushi, players pick up a new Maki card and discard one. You can always pick up a new card from the draw pile or you can pick up the top card from the discard pile, so it is important to be aware of both your own hand and your opposing Maki Stackers! Once any player has a full stack of one filling, they shout MAKI-STAKI! and play ends. They win that round! To show their stacking prowess is above that of their opponents, they are also awarded a Soy Sauce Fish, the only truly fitting award. At the end of 5 rounds, whomever has the most Soy Sauce Fish wins.

Although the concept and play sounds simple, there are some extra action cards within the game that add more challenges and problems for players. These are played as soon as they are picked up and cannot be collected from the discard pile. Some cause huge problems for opposing players, some affect the active player.. They’re more of an annoyance than anything, but a nicely timed pick up of the “Nice Rice” card can cause an instant win! That being said, you could need one fifth of a cucumber stack and end up drawing the conveyor belt card… Meaning your ready to win hand gets given to the player on your right!

The game’s visuals are extremely unique as well; the box is a giant sushi roll! Straight away it demonstrates its quirkiness. Then there’s the cards! You have zero risk of ever questioning which game a missing Maki Staki card belongs to. The cards are circular and entirely fit the look of being a part of a sushi roll (excluding the writing on them for ease of access!). They also have all but one fifth of the actual filling removed to allow you to stack duplicate Maki cards so you, and your opponents, can easily track who is in the lead and the closest to becoming a Maki Staki Master! The winner’s tokens also fit the whole Japanese cuisine theming, being shaped like Soy Sauce Fish bottles. It’s very clear that Ginger Fox Games put a lot of thought into the smaller details of the game, adding to the joy of getting it out and playing it!

This quick game isn’t very quick however.. Quick games are becoming a favourite of our group, and Maki Staki is and isn’t a quick game. The game itself is fast paced, requires quick decisions and allows you to make use of what others haven’t noticed… but it’s played in rounds, and when you couple that with everything else, it stops being quick and becomes a lengthy game. For those less inclined to go for a hardcore gaming session, Maki Staki is the perfect addition to your collection; it’s reliably fun and doesn’t require heavy levels of concentration, making it a perfect party game for more casual players! For those wanting a speedy filler, Maki Staki is a decent enough choice, but make sure you choose how many rounds to play wisely!