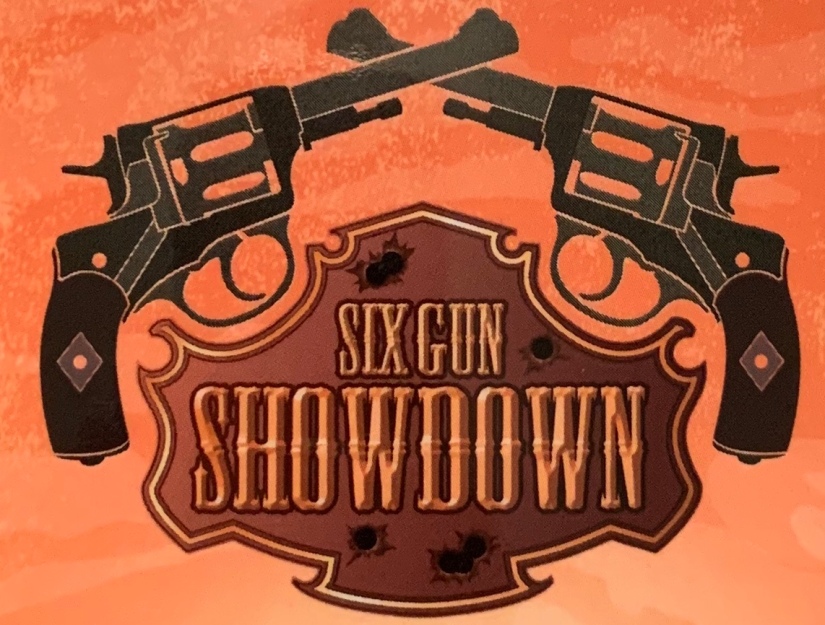 A tumbleweed strolls through the alleyway of taverns, horses and strangers. It’s the end of the line for one of these gunslingers. After a prolonged and tense wait, an outcome is going to be decided. On one side, the lawman. Noble in his quest with a determined stare, he knows what he must do to keep his path righteous and the townsfolk safe. At the other, the criminal. In her own head she could be the hero of this story, taking food and water for those she cares for, standing up for what she thinks is right and caring for those she needs to… As the sun reaches its peak in the mid-summer sky, there’s a spark in the atmosphere between the adversaries – a break in the tension. The criminal’s fingers twitch instinctively knowing that the lawman won’t wait much longer. They reach out and grab it. The lawman is quicker, placing his hand upon it before his foe can act… After what felt like an eternity, the criminal knows it could be over… Until the lawman rolls and missed, shouts in frustration and the criminal mocks him openly at his arrogance, winning in the final round!

At least that’s how our most recent game of Six Gun Showdown went (minus the tumbleweed).

Six Gun Showdown is an excellent example of how a 1v1 game with dice should be played. Quickly, intensely, and with a good balance of both luck and decision making! Before I get started, this game is a prototype. All components pictured, flavour text visible and card effects are subject to change upon Kickstarter funding and finalisation. Also, the rules we played were specifically oriented around the 1v1 variant of play. 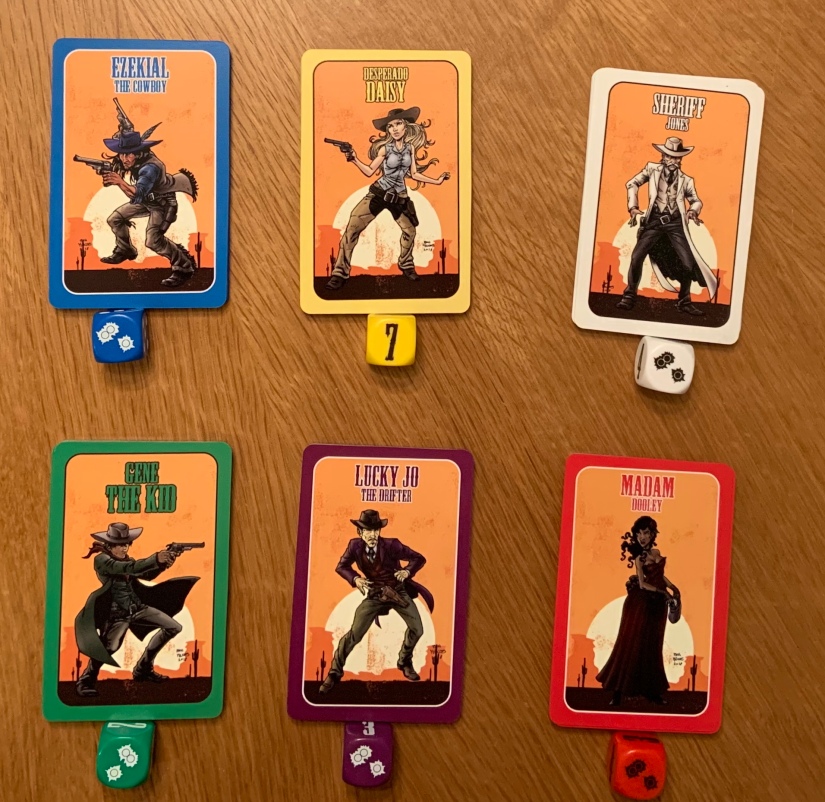 It’s quick. To kick off, players choose a character. Each has their own dice and 15 cards. Players then choose 6 cards from their hands and lay them them face down. (It’s important players take note of where each card is!) Then, they take turns to choose cards with varying abilities until someone unveils a shoot card. At this point, anarchy ensues! The player revealing the shoot card needs to reach over and touch one of their opponents cards, while the one being shot must defend their cards by touching one first!

The result of who is quicker changes how the outcome may be determined. Should the attacking player be the faster of the two, they can shoot their opponent first by rolling their dice and applying the accuracy bonuses from the revealed cards. If the defending player gets there first, they can reveal the card they touched and the game continues its normal path with players deciding who shot first based on the value of their speed generated through the cards. Then they establish their bonuses of accuracy from the cards too. Next, they roll their dice and the atmosphere in the room changes… If their total is 6+ with the accuracy bonus then they have shot their opponent and won the round, miss and their opponent shoots back following the same pattern. Rounds can end with no one being shot, but will always move into the next round.

The handling of this game is surprisingly good for such a fast paced game! You always expect a game that plays quickly to have very little thinking time, with a lot of games being run on impulsive actions alone. Six Gun Showdown allows for thinking time within its play so long as players actively choose to have it, but they won’t; the moment they sense weakness in their foe they’ll pounce on a shoot card and dive for their oppositions cards. And honestly I think that’s great as the quick pace and forced decision making removes enough of the randomness the dice roll causes, and having to remember the cards’ placement also adds responsibility to the player. Normally success hinges on a die roll in fast games and that gives players something to blame. Hoping for a 1 in 6 result isn’t skill, it’s probability. I love a game that you cant blame for your shortcomings, and this has done an excellent job of ensuring fault lies with the players.

The different characters do an excellent job of being balanced enough to make them worth choosing, but have enough diversity amongst their cards to make them feel unique. Their dice are different from one another and the number of cards they have of each type varies based on how the character is designed to play. Some characters are clearly better for newcomers as they’re fairly varied in their cards, others are heavy in one area and their dice reflects that too. Choosing cards to buff yourself or reduce your opponent’s bonuses can make or break a round. I’ve won by one accuracy bonus point simply based on one card I chose, and lost by a lot when my opponent went heavy on the attack!

Should You Be Excited?

Absolutely. This is the sort of punchy, quick game I’d expect to pull out on a long journey or the sort I’d instinctively put in my backpack when visiting friends and family! Considering we only played the 1v1 variant and that this game has scope for 6 players, I’m excited for what the creator may decide for the future. I’d also be thinking about how well this game would do as a warm-up as it definitely got our heart rate going! I’m most excited to see how this game looks and plays when it’s fully polished, as the prototype I played with looks gorgeous and plays excellently.

I personally haven’t played a game like this whatsoever, though I may not be as well vetted in games as some! This game adds something new to my gaming shelf; it’s short, sharp and to the point. You win or lose. Live or die. Shoot or be shot. Bang or no bang? Anyway, the game’s brilliant at what it does and it does it excellently. Fast paced combat themed beautifully and designed really well. So load up them six shooters, spin the barrel and maintain eye-contact. This one’s a live or die situation.