Rock, paper, scissors is an ancient Japanese hand game that everyone knows how to play. Rock beats scissors, scissors beats paper, and paper, somehow, beats rock. It’s one of the few games on the planet you can gesture towards and get a game out of! Since then, many games have run on the pretence that an element beats another but is weak to one more. It may surprise you to know that some big video games’ combat systems start with this at their heart! (Of course equations and probability are thrown into it to add a bit more spice..)

Knowing how to play rock, paper, scissors should have you fully prepared to play any game of the likes right? Well… Elementos by Tyto Games is here to run that system with a bit of grid movement in it too! Elementos is a game for 2 players and plays in 15-45 minutes – that big a jump. It requires planning, patience, and the mindset of a samurai… Well it would help! 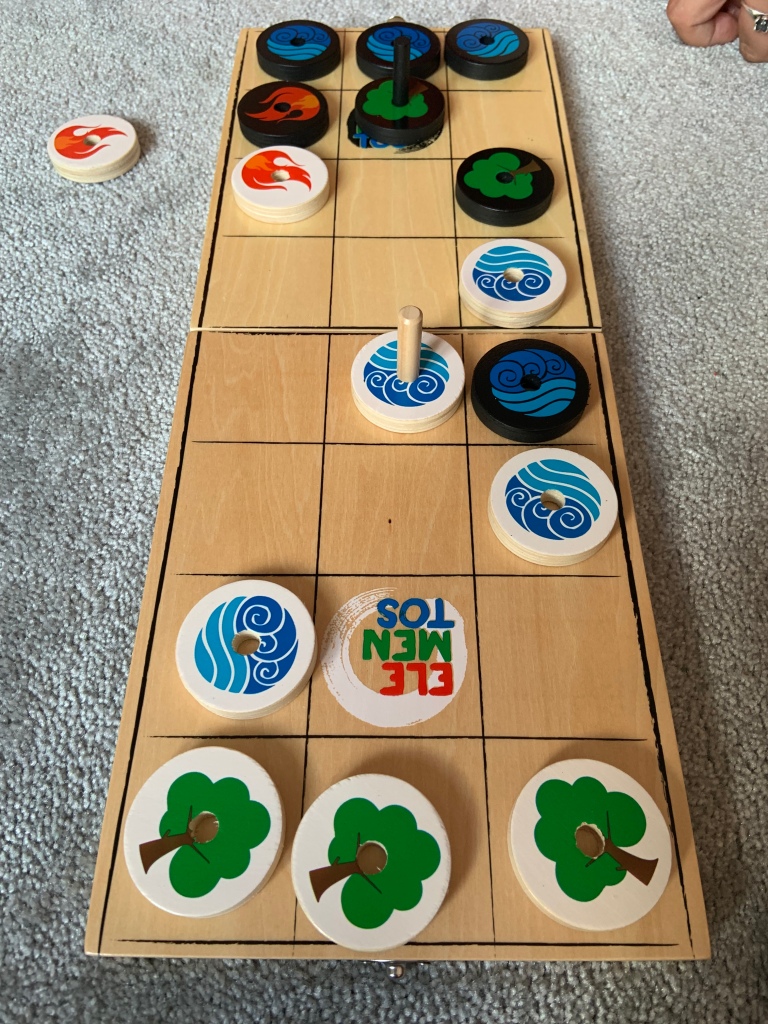 How Do You Play?

The goal of Elementos is to be the first player to take a wand to the other side of the board. The idea is simple, you have 9 playing pieces per player, one wand and a 3 x 10 grid to play in. You can move your pieces one space left, right or in any connect spaces ahead of it. Never backwards. Every playing piece has 2 elements on it – one on either side – and these run the rock, papers, scissors rule set. Fire beats wood, wood beats water, water beats fire.

The playing piece with the wand cannot be taken and cannot take. The wand is all powerful (praise the wand) and protects that piece. The downside to the wand is that its bearer can only move forwards in a single line. Luckily pieces can pass the wand to another connected piece to get around obstacles. The final rule is that pieces can be flipped to their alternate elements as an action. They don’t move positions but simply change their element to the other side.

The game is ran in turns with each player taking one action per turn. A player can move a piece, take a piece (following the rule set), pass the wand, or flip elements. There will be some moments in game where you are at a stalemate, flipping a tile each continuously. This is called equilibrium, and as nice as it sounds it has to be broken! One player must choose a different action to play to move the game forwards. Once a player’s wand is at the other end of the board, that player wins the game.

Elementos is a thinking person’s game. There are a wide range of tactics and advanced moves that no doubt someone has named. It takes all sorts of people, after all! Anyway, the game isn’t as simple as it first seems. You can go gung-ho with it and drive an Elementos piece to the end as quickly as possible, however it’s not going to get you a win. You can’t do it. Because you can’t take backwards and special rules affect the wand, driving too far means you’ll let the opposition by. But passing the wand about too much will cause gaps and potentially trap pieces too. It gets trickier the more predictable you are.

That said, it’s tremendously good fun! Beating someone hands down isn’t rewarding but it opens discussion for techniques. Not quite naming them yet, but techniques and tips nonetheless. I beat my partner three times in a row, and it went from an easy win to a skin-of-your-teeth victory! I didn’t play again after that, I knew she’d destroy me. And what’s more is she enjoyed it despite losing. Being out of your depth in a game isn’t exactly comfortable, but Elementos is a game that allows for a lot of hindsight. You’ll know where it went wrong and what should’ve been done, and next time you will do it!

I can’t deny the simplicity of this game – it’s rock, paper, scissors. But the depth it provides counteracts that tenfold. For such a simple concept, it allows for a lot of choice and scope for clever manoeuvres. No piece is solid state as one element, but knowing when to switch, swap the wand, or to move is key to victory. The pieces are well made and clear, the box is excellent for travelling and the instructions are concise.

There is even scope for more complexity by playing blind – you aren’t allowed to peak at pieces underside, you simply risk the flip! This is a game I keep coming back to play, time and again. It’s excellently simple and can entice non-gamers with its ease of access, but can still challenge those experience in tactics. A quality game that I’d recommend for anyone wanting a tactical opportunity of challenge and planning.