Being the winner isn’t everything, contrary to my own beliefs. I’m not a sore loser, I can just be a bit ruthless to win. The participation is the most important thing and the only sure fire way to guarantee a chance at winning. If you don’t participate, you can’t win. Nor can you have fun! Now, whether you’re competing in a sporting sense, gaming sense, or in a hardcore game of eye-spy, there will always be scope to win by refining your skills. With party games however, it can more often than not be those with the sharpest tongues or minds that win. Trophies by Facade Games is all about winning and historic winners. It’s a party/word game for 2-30 players and it can last between 5-15 minutes.

Trophies is unbelievably easy. So much so that only the “Judge” (player with the cards) needs to know how to play. Everyone else will pick it up along the way. The Judge reads a topic off of a card and shows the back of the card to everyone else, this reveals the letter focus. In example, if the category is animals and the letter is C, you could shout cat, cheetah, crocodile, cockerel… whoever is the fastest wins the card.

Now there are two winners in Trophies. One person who has the most Trophy cards. The other is the person who tried the hardest (as determined by the Judge). Luckily for the big winner, there’s a tiny trophy that the winner can hoist above their head triumphantly. 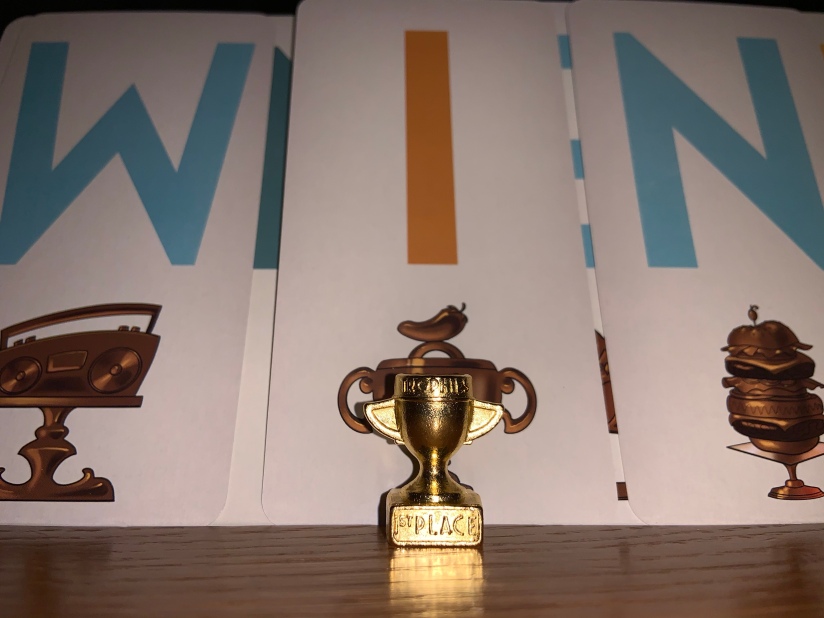 Trophies is as easy to pick up and play as it is said to be. You pick it up, one person learns it, you play. It’s crazily accessible without putting people off through simplicity. Also, it’s easy to adapt to the group’s needs should they want a quack turn around between plays. For its simplicity, it gave us a great time and made for excellent fun!

I was in two minds about being the Judge because I always have qualms with games that require a Judge’s decision. Surely there will always be some bias to the choice right? It’s like going back to primary school and rating your friend’s work 10/10 on the basis that you think they’re cool. Trophies is a game I have no qualms with. When you’re in the heat of the moment, having words thrown at you, two things will stick out. One is who was fastest. The other will be who answered most ridiculously. There’s a mass panic in people’s faces when they get a category and an obscure letter. You’ll get some beautifully clever answers. Something Large and D will result in Dinosaurs, Didgeridoos and the inevitable Dingos. There’s no scope to argue about the Judge’s decision as it then puts that player in the light for arguments when their turn comes around.

Participating for the Win

The pressure you’ll feel is unreal. There will be serious excitement when you hear a category, think of something, and see the letter correspond to it. Never before have I shouted Shopping, Go-Kart and Portcullis faster. It’s excellently fun in the simplest sense, and it never lasts longer than it needs to. You play a few rounds and someone is the winner. Then you pass the title of Judge onwards and away you go again. For such a simple and accessible game, the tension is mad and makes for great fun and conversation.

Trophies is a stunningly made game. No faults in its visuals for us. The game comes in a tin which everything just about fits in. There will always be a tad of movement, but you won’t lose anything! The tiny trophy is surprisingly weighty for what it is and you will feel quite the success story holding it above your head. Your parents will be proud. Trophies’ cards are robust enough to be held and passed around and there’s no risk of permanent damage through their use.

What we loved the most visually is something that doesn’t impact the game whatsoever. On every card is a trophy, an image of it (possibly not that specific trophy) and an explanation of its purpose. This serves no benefit to the game but is enticingly clever in that you’ll want to read as many as you can. I found myself sneaking a look at some cards just to find some awesome or weird trophies! It made for a good chuckle and added something more to the cards so they weren’t just for play. A subtle but beautifully fun addition. 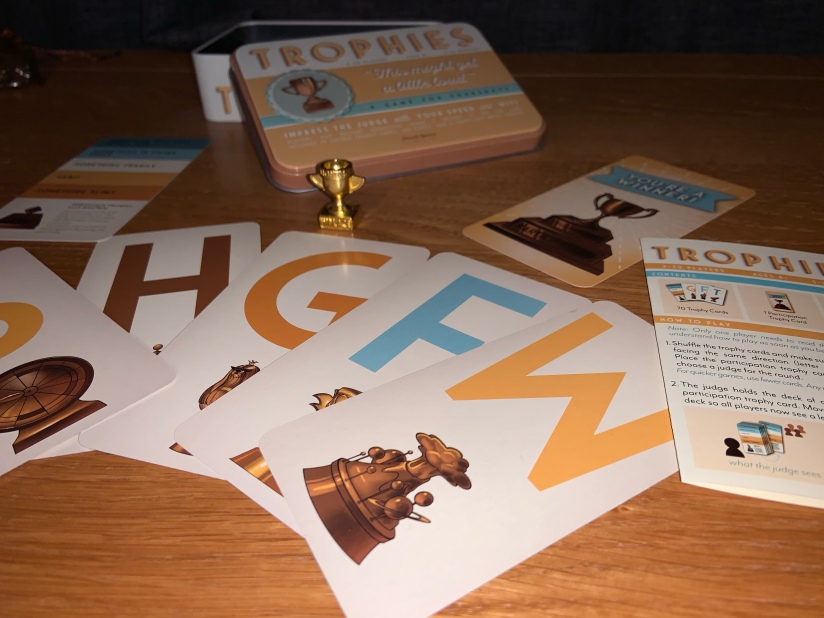 We did find that when we used the whole stack the game lasted too long. We often said that the first to five won just for variety and flavour. It made life easier and also ensured people were focussed and ready as there was always risk of being 11 cards down from the lead and losing interest. It also reduced the chance of repetitions and repeat cards, meaning every play was different.

Our only other qualm was on the human side of the game. This was no fault of the game itself and was completely down to us as players. It’s all well and good people being able to attempt to be objective in their choice for participation winners, but we realised that it needs to go beyond this. We had very few instances where people would argue the category didn’t fit the words chosen. It comes down to a person’s perspective really. Is Retail a skill in a professional sense? Or would Rowing be a better choice for sporting skills? Even Rapping as a skill/hobby? The judge’s decision has to be final, but more importantly it has to be fair. You’re likely to start a feud if you start playing favourites!

Trophies is a game we enjoyed. We really recommend it for families, parties and gatherings due to its ease of access and flexible play. There’s no denying how fun it is. We admit we had to implement a card cap or two to make it fit for us – nothing that changed the gameplay, only its game length. The categories and letter combinations either made us think outside the box or shout inanely at someone to the point where any sane person would cry. It’s not a game we’d recommend to hardcore gamers, but it is perfect for casual gatherings and family parties. And where better to hoist a trophy above your head than in front of your defeated family!?