This Kickstarter preview is also available cunningly on Zatu here!

There’s a funny thing about fault. It’s always there and no one claims it, like free samples of blue cheese in a shady supermarket. It holds a stench of repugnance and shame that you will neither accept nor acknowledge. And when you’re on the end of the stinky stick of fault, you’ll make sure your guilt is forgotten quickly no matter the cost, especially if you know full well you can’t be entirely held accountable. The Barmaid’s Tale by Red Genie Board Games is a game of blaming, betting and knowing when to swallow that cheese and accept fault. Of course, you’ll bribe, blame and blurt our explanation as to why you definitely did no wrong. No noble adventurer ever did wrong!

Every player is a character sat around a bar table. You’ve all just come back from a series of quests which probably didn’t go too well. The ins and outs of these quests are your own choosing and are entirely used for flavour. Each player receives one of every coin, a beer screen to hide said money’s, and the first player receives the first blame token.

The aim of the game is to have the most money by the end whilst also avoiding collecting three blame tokens. The first player places their lowest valued coin on the counter and begins their narrative of what happened on the quest. Towards the explanation of where it went wrong, they’ll need to blame someone else around the table. The legitimacy, factuality, and plausibility of the story doesn’t matter really, they just need to remember they’re not at fault!

Once a player has been blamed, they have two choices; accept the blame or pass the blame. If they accept it, they take the coin, fess up and a new round begins with them as the first player. If they don’t accept it, they take the coin and replace it with the next biggest incremental value. They then remind everyone how it want their fault but someone else’s! They can’t blame the person who blamed them, but can blame anyone else. Remember! You also can’t pass the blame if you can’t increase the value of the coin on the blame! 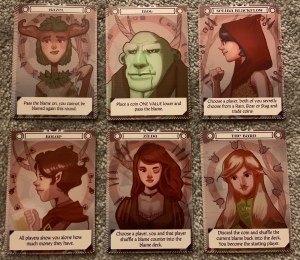 If a player accepts the blame they keep that respective blame token and take a new one to pass around. Having blame tokens isn’t good, but there is a silver lining! When you have the blame, you can flip over one of your collected blame tokens and this may enable you to gain an advantage. It may also ruin everything. That’s the risk!

Each player’s character has a unique character with a unique ability too. This will definitely be beneficial and help them in some respect, however their ability can only be used once per game. Use wisely! When a player has three blame tokens, the game is over. That player loses automatically, regardless of their monetary value – a small price to pay for being a hindrance during quests. Everyone else counts up their money and whoever has the most, wins!

The game relies on your ability to point the finger in an interesting way and develop a narrative. How you tell the story will determine how the finger gets pointed. Of course, it doesn’t need to make sense either, so long as you aren’t at fault. It’s never your fault.

What’s gorgeous about this game is that you will develop a world in which to accuse people. Whether someone broke a bridge, dropped a splash potion, upset a native tribe of half orcs or lost their horse, it all becomes canon. We referred to past quests, locations, and events frequently throughout the games played. The invisibility cloak caused no end of mayhem, and the Harp of the Ocean – that turned out to be fake – wasn’t forgotten about! 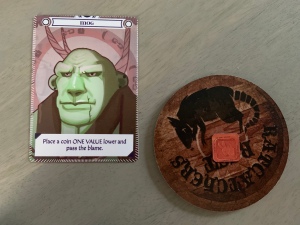 We had an incident during one of our quests where we were asked to go to the mountains of Agrabah to locate some dire wolves. An easy feat for adventurers such as ourselves – or so we thought. After an arduous journey up the mountain we were face to face with a rope bridge. This was sadly the only way across the chasm to the next peak. Our bard went first, like a small elephant, and broke every other plank making the bridge unusable. Of course, our bard did remind us that he was pushed to go first by our warrior as she was deathly afraid of heights! But the warrior too had good reason. They were only afraid of heights after our assassin had caught them in a net trap they’d laid earlier trying to catch our dinner. The trap was badly made and flung our warrior a good 30feet into the air! Naturally our assassin acknowledged their wrong doings and took the blame. But they couldn’t let it rest there. They then proceeded to remind us all of another misadventure…

Things becoming canon through your own narration makes you care about what happens on the adventures. We found this removed the ridiculousness of players being silly with stories as they wanted their character to have an air of class about them. This also helped us want to shift blame in a believable, but fun way. As said, the Harp of the Ocean was a fake and was of no use, and I had to shift the blame. So, I integrated it that my character couldn’t read and blamed someone else for putting me in charge of the map. Instantly my character has more depth and I’m faultless for it! This then became a point of reference multiple times, mostly to my own downfall, with me causing some issues when leading the troupe.

We took to The Barmaid’s Tale like a duck to water. We wanted to tell our stories and we didn’t want to be at fault. Some stories were long, some were short. Most were ridiculous but they were all good fun, too! There were moments where we needed to think about the plot and story, and it’s here where we slowed down. However, when we didn’t overthink and went with the flow we produced much funnier and vaguer stories. Vague meant it could be interpreted and evolve easily, allowing for more story telling! It pushed us as far as to want to scrap the next game on the list and continue telling of mishaps and tales from our adventures!

If you’re wanting to feel what it would really be like to be an adventurer, with the warts and all, then The Barmaid’s Tale is undoubtedly a perfect fit. Social gatherings, warmups for a game with player driven elements, or even to get people involved in a game’s session, this game looks to be a universal fit. Keep an eye out for the Kickstarter and make sure you check this one out! Now don your gear, point the finger and above all, remember, it wasn’t your fault!