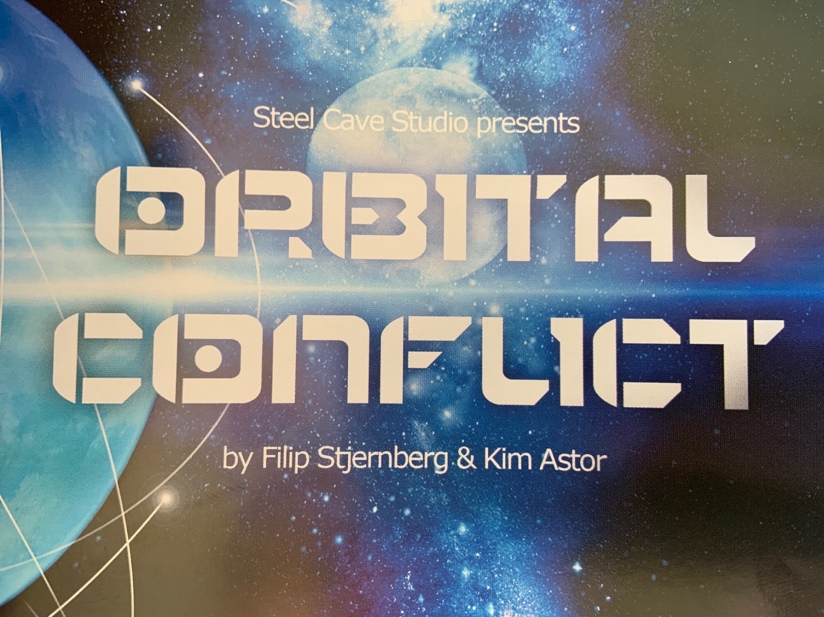 Space is a group favourite theme for all of our gamers, except one. The rest of us adore it and find its thematic depth wondrous and exciting! Any game with a solid theme is great, but a solid theme set within the deep cosmos is even more appealing! Orbital Conflict is not set within the deep cosmos. Not within the star, planets nor in the depths of the Milky-way galaxy. It’s just outside our little blue marble, Earth. And its theme isn’t that whimsical, wondrousness previously mentioned. It’s a hardcore, satellite building card game that, as expected, we loved. But not for its theme alone, this game took us by surprise with its gameplay and really got us going!

Orbital Conflict is a hand management game of collecting victory points (VP) before cards run out. You have a satellite, which you add modules to in order to do certain things. These satellites are incredibly technical and can host a plethora of different modules. But these modules have a resource requirement that has to be met before they can be used to gain their benefits or produce more resources. To earn points you have to earn contracts, which require you to meet specific production values on your satellite modules. Whoever has the most VP when the Station cards expire is the winner!

To start, players create a draw deck of Station cards using a specific number of cards based on the player count. The Investor cards (the smaller ones) are all used. Each player is then dealt five cards from the Station deck. Then every player participates in each phase of a round before the Initiative card (first player card) is passed. Whoever has the Initiative card takes the first action of each phase.

First off, each player in turn draws two Station cards. They may also draw two Investor cards face up in front of them. These will entail specific criteria to meet to score VP. Then comes the main phase. During this one, players can play up to all their cards as new modules or extension modules to their station. A module is a separate stack of cards, whereas an extension is an addition to an existing module. Station cards always have two sides which can both be played as either modules or extensions. The extension element of a card is the darker leftmost side, whereas the module is the whole card. The only constraint is that only cards with a defence value can be played to the station. Those without defence values are played cards for their entailed actions (or used for their reverse standard side).

Extensions cards can be played on top of a module to replace its purpose, or below for its extension value only. You cannot play them to the middle of a stack, and they are not interchangeable between modules. All Station cards have two values to them: production and requirement. Production values are green and show what is produced by the card, whereas requirements are red and show what is needed for the card to function. If your card requires four power, you need to be producing four or more power for it to function. When met, they are activated and if not, they’re deactivated. Module production can be used to power other modules, and it is a player’s choice which modules are active. If needs be, a player can deactivate a module on a whim to activate another one (for a round).

Station cards can be discarded from the hand to use their discard functions. These are often restricted to specific phases and cannot be played in others’ turns – unless otherwise stated. Only one discard rule can be followed per card, and these do not require their costs to be played. Special rules (with white backgrounds) can be played on a players turn in the same sense as a discard rule, however only one special can be played per turn.

The final element of this phase is the claiming of investors. Investor cards have two elements to them, demands and VP values. To claim an investor, a player must meet the demands at that time. You may only claim one investor per turn, or you may force another player to claim one of yours. Only the player with the investor in question has to meet the required criteria. When an Investor is claimed, the other is discarded. A player may only have three investors at any one time, and must discard the oldest to make space for a new one. All investors are discarded when this phase ends.

The Combat Phase and Game End

The next phase is the combat phase. Only the current player may attack in their phase. On cards, modules and discard rules used to attack are called attackers. Anything aimed at is a target but does not need to be active. Anything attacking must be activated. Players must choose one (or more) attackers and one (or more) targets. Modules are attacked as a whole, you can’t aim at a single extensions. Also, one attack can not be distributed, it hits a single target only. The attack value must be equal or greater than the target’s defence, if it is then it deals damage equal to the attack value. If not, the attack is unsuccessful. A damaged module loses cards, from the bottom upwards, equal to the attack value. Two attack causes a loss of two cards.

The game ends when all the cards have been drawn from the Station deck. All players finish the final phase and then count up their VP. Whoever has the most is the winner!

Orbital Conflict is a game presenting as shallow initially: two decks of cards and a rule book. It doesn’t show itself to start off with, at all! We nearly brushed this off as a light weight hand management game. It isn’t. No where close to that. It’s a deep game with lots of tactical options and plenty to manage. That’s not to say it’s inaccessible, it’s complex and can be managed easily by knowing what cards you have played. The theming is great and the scoring is a superb unique twist on what we’ve seen before. It hit the right chords with me, and my partner who isn’t a huge fan of space themed games anyway, also enjoyed it for its depth and play.

The station cards you choose to play will determine which modules you can activate. Play a card that requires too many ships and you may find yourself unable to activate the module. You’ve got to know the benefits and downsides to each decision. I found it quite tricky to begin with as I seem to always get some really cool cards, the sort allowed you to do lots. The issue here is that these fantastic cards required some set up to play. Ensuring that I had enough power was the first hurdle.  And then everything else, too.

Of course managing to supply these cards did me no favours either, as the contracts available didn’t always match my production at the time.  I found it best to have a few modules specialised in different things. Now this didn’t work for my partner, she found it quite tricky to only have one module producing one thing. And in honesty, I found it quite tricky myself. It worked. However, it also required the right contracts to come up at the right time particularly when considering the fact that everyone else or through my plan and rained fire on my station .

We often found it’s best to go on the fly, using the abilities of cards to manipulate your station. And, being the nice guy that I am, I always ensured that I claimed any contracts I could. If they were good, I’ll keep them (naturally). If they were less desirable, I’d ship them off to one of my opposers.   It’s how you manipulate both the station cards and the contracts that will determine how confident you are of the game – but that doesn’t necessarily mean you’ll win! 

As previously mentioned, I always claimed any contracts I could. It’s a good tactic to have to both get some points on the board and remove some of your opponents’ better contracts  . Because the contracts queue, with the oldest being removed first, some of the discard abilities of cards come in really handy. This is to both manipulate your own line of contracts, and your opponents. But nothing goes unpunished!  Orbital Conflict is one of those games where you remember who did what and an interglacial vendetta can quickly occur !

The contracts vary and are thematic to the companies providing them.  First line defence requires you to have X amount of shields, whereas a travel company may require you to have so many ships. And the more you require, the more points you will earn. The hardest thing here is knowing that the earlier you claim a contract, the sooner it will be removed from your queue. But when the contract has gone, it’s gone. So do you claim or don’t you? Well… There is no delicate balance here, and no over-the-top tactic. It’s simply a case of claim what you can and ship it off if it’s rubbish!  

Is There Beauty in Space?

Orbital conflict is game centred around building space stations and claiming contracts.   The entire premise sounds industrial and bureaucratic. To have whimsically illustrated cards with bombastic scenes depicted on them  would remove any purpose of the theme. The artwork is beautiful, there is no denying that. But it isn’t meant to have that light-hearted “all fun and games” feel  . The illustrations are cold, industrial, structured, and more than likely what space would be like on a space station  .

Alongside this, the quality of the cards and symbolisms on them is great!  Once you know that red symbols are requirements and green symbols are production units, everything else falls into place. Not only that, the discard and special rules on cards make sense and don’t require decrypting. Our first game required us to use the rulebook through an entire round only. Beyond that, we were able to pick up and play from there.  

Orbital Conflict is a game I assumed I would enjoy from the concept alone. It isn’t a game I expected my partner to enjoy! It’s a game with a unique theme and some great ideas on how take that elements can be used to really twist scoring.  The weight of the game matches its complexity and avoids complications through the use of symbolism and a very well worded rule book. I would highly recommend reading the rules before playing, as one or two minor rules are hidden at the back of the book  . Other than that, Orbital Conflict is a game we thoroughly enjoyed and one that we will no doubt be coming back to!