This review is also modularly available on Zatu here!

Just when you thought you’d escaped the station and the cruel A.I., the game just got a bit more spicy. Now you’ve got to compete with two new variations, one has you obsessively ensuring things happen in the right order, and the other gives you two new problems to drive you around the bend! Re-Sequence requires a more tactical approach to ensure things happen sequentially, and Override has you getting some naughty robots back to their base modules, too.

The Override and Re-Sequence expansions for Assembly introduce the platform/hold card. These cards are used in both expansions. This new command allows a bay to be temporarily locked and unaffected by a rotate command   . This new addition acts differently to other commands, as it can be executed out of turn to support a rotate command – and it doesn’t need verifying! In layman’s terms, it allows modules to be rotated further without the need to lock bays properly by having modules skip them. This makes things a lot easier, but with the uphill climb of these two expansions, you’ll need them!

Getting Things In Order! (Re-Sequence)

The first expansion for Assembly we’re going to talk about is Re-Sequence. The difference with this variant is that all modules must be locked in sequential order. You can choose which one to lock first, however after that it has to be sequential clockwise. Not an easy feat.

To set this variant up, you adjust the deck accordingly and include the platform/hold commands. You can only use malfunction sets with a clock face on them for this, however it is compatible with the Glitches expansion’s D, F, and G sets. The solo set up is different the the cooperative and requires different cards in the deck to adjust difficulty. One last interesting tweak is that rotate cards can allow you to cycle the module stacks and that the swap lets you swap modules from the stacks with active modules. This lets you put the top module on the bottom. You then take the module tokens and put them in two stacks. You are now ready to have the A.I. take you down again!

We thoroughly enjoyed this one. Having the focus of needing to keep them consecutive meant that we were focused on just a single module. This also meant that, without saying anything, it was easier to identify our cooperators next move . It’s still rockhard, and incredibly tricky, but something about the way it’s played means even a bad scramble won’t make it game over!  What’s more is how much the platform/hold cards helped and we were able to use them easily.

Re-Sequence made you rely a lot on platform/hold cards when one or two modules were askew but some in the right spots. It only became a problem when we expected one another to have one.  Confidently playing a rotate card   only to have it ruin everything  was probably an oversight on my part, but it taught us a lesson. We then had new purpose for the inquire phase and were more willing to be unable to verify. We found sequential locking was more important than having tonnes of freedom. 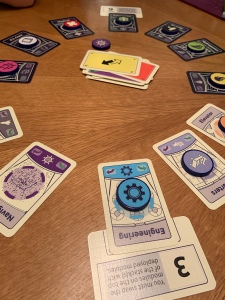 The other expansion for Assembly is Override. This is where you have two robotics running amuck whilst you’re trying to lock modules into bays. To beat this variant, the robots need locking back up where they belong in their target bays. However, they can only be locked in at the same time that a module is being locked into a blueprint. Everything has to be locked in at once! What complicates this further is that the robots move with the modules they’re on, but can also travel using rotate commands. They will never stop in a locked bay.

To set this one up, you’ll need to do one or two tweaks. Like with Re-sequence, the deck is altered based on the number of players to account for difficulty. Choose malfunctions for your game (you can use any, but it also includes its own specific Override ones). Continue set up as normal until you are ready to add a module. When the die is rolled to add a module in setup, a blue robot meeple joins that module. You then place the other blue robot meeple on the opposite blueprint. Now roll the die again, draw another module, but add a white robot meeple and its counterpart opposite on a blueprint. The robots on the modules need to be locked into the blueprints where their counterparts are   – it’s their target location! These aren’t affected by scrambles, but the blueprint they sit on is.

The command players can execute have again been altered slightly. Lock lets you lock modules as normal, but you can only lock modules with robots on them if they are both in the correct bay. Swap lets you: swap two modules as normal, swap robots and modules with other modules, or swap position of the robots without modules. Modules carrying robots cannot be swapped for modules without. The platform/hold cards prevents robots from moving along with their modules, however only one robot may ever occupy a bay, and they can’t reside in empty bays.

Rotate lets you rotate once or twice as normal, however it now has extra effects! It may only move all modules without robots on them, treating robot modules as locked. Or move all robot modules but not modules without, treating those as locked instead. Or move all robots simultaneously to an adjacent bay with a module. Robots don’t jump bays, so some may not move, but they can move two bays as with all rotate commands. You can’t just rotate everything this time!

This one is rock solid hard. Incredibly tricky. Not impossible by any measure, and we locked the robots into place several games… but by the time we’d done that, it was game over! Override required us to really think about every single move. Normally, we’d overlook rotates for swaps – they just fit in better with our play style. But because the robots don’t play by the rules, it meant swapping them would only put us in a slightly different position. But it allows you to manipulate the board much more easily, And also meant you could manipulate the modules in specific ways. No end of times will be in a position where rotating the robots only was much more beneficial    than spinning everything.

Re-Sequence and Override are welcomed additions to Assembly to spice it up that little bit further. The vanilla game ran beautifully, but these additions are incredible and so easy to add in and take away. The additions of new malfunctions and more roles also keep things fresh without extra complication. If you’ve played Assembly and are ready for that little bit more, definitely grab this double expansion and let the A.I. run riot one more time!