If this dissertation of a review is too long for you, our TL;DR version can be found here!

Have you ever marvelled at the advances of modern medicine? The progression spike is insane. So much progression in such a short period… and yet, not long ago would you have been condemned as incurable or destined to die for even the smallest ailment. Mostly because actual doctors didn’t exist! Instead you had “doctors”. These lovely folk were people who desperately wanted to help and make the world a better place… but in honesty, they often just made things worse. Trust Me, I’m A Doctor by Half Monster Games lets you relive that nostalgia! It’s a party game for 3-8 players and takes about 30 minutes to play.

The game is relatively simple: you get an ailment, you choose a cure a player is offering, they take the ailment as a point. It’s played using cards only and is easy to grasp. To kick off, all players are dealt three ailments and six cures. The cure cards are placed within reach of all players and the ailments are placed back in the box. The first player to have their cure chosen three times (to collect three ailments) wins.

The cures and ailments both have symbols on them to signify the type of treatment they would been. Barber shop surgery is symbolised by scissors and a razor. Psychological or Religious treatments are signified by the Greek characters psi. Medicines, Remedies and Alchemy are represented using a flask. In Trust Me, I’m A Doctor, players take turns to be the patient. When an ailment is read aloud by a player, the rest need to choose cures that match at least one symbol on the card. The “doctor” players then present two cures (coinciding or alternatives to one another) to convince the afflicted that their cure is the best. Players can argue, discuss and disprove the opposing cures until a cure is chosen. The game encourages discussion, argument and justification alike. The game ends once any player is chosen a third time. 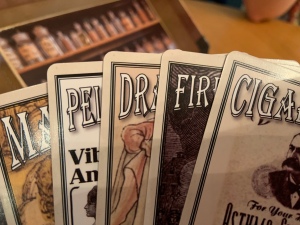 Trust Me, I’m A Doctor is simple in its concept and presentation, but its execution and application are fantastic. Before health and safety removed the grey areas, anything was a viable treatment if you had a silver tongue! It seems mad, but the historical accuracy of some of the ailments and treatments are spot on! How the players couple these is another matter… even pre-medieval practitioners may have raised an eyebrow at some of our suggestions. Blood ghosts? You’ll need an amputation for that. Hair loss? Leeches are your best bet.

Did You Buy Your Medical License!?

The arguments had in this game are destined to be nonsensical and light. If you haven’t yet explained to someone why heroin and leeches are far superior to torture and an exorcism at fixing someone’s missing limb, this may well fix that. What’s more is how passionately you’ll argue this cause. You need to drive forward the ignorance of the competition to win, and keep a straight face whilst doing so. It’s not easy to do, but the more serious you are the more doctor like you seem. Participation in arguments is necessary and integral to the play… Should you be unwilling to engage, you’re going to have a bad time. That’s no downplay on the game itself, however. 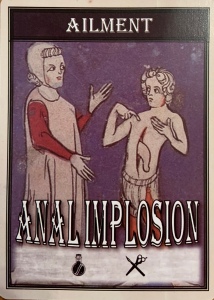 Do I Have To Operate?

Trust Me, I’m A Doctor is a party game, so it relies on discussion and gesturing. You could even say it needs some role-play too! We found the game was near untouchable when we were all knee deep in scrubs, pointing in one another’s faces, questioning our credentials as those suffering weighed up amputation against fire therapy. Round to round, the engagement was dependent on the narrative you could produce for your cures. Overthinking it was only an issue to begin with – once you’re over the initial awkwardness it’s wonderful!

Of course, if you don’t have the gift of the gab, or you aren’t a confident speaker, you may not enjoy all that this has to offer. I mean, it could be played on choices alone… but that would result in a stale, dry experience. Trust Me, I’m A Doctor is a game that needs you to throw yourself in at the deep end and give it a go. Which isn’t easy, but goodness me is it worth it!

Thematically the game sets itself up as relatively lighthearted. The box appears as an old timey medicine cabinet, the game itself is comprised of only two decks of cards, and even the rules are written in an approachable manner. Two card sized instruction sets. Easy to follow, easy to grasp. It’s effectively a pick up and play game! Where this lightheartedness dips is in the cards’ artwork…

For all the right reasons, Trust Me, I’m A Doctor removes the lightheartedness it gave you and presents itself with the gruesome truth of historic medicine. Through the use of superbly chosen illustrations and images from history, coupled with a tongue in cheek explanation, the game lets you know just what each cure entails. The historic accuracy of these images is amazing. Attention to detail is everything for a truly thematic approach to a game, and these card certainly got our attention. There were one or two cures some of us had to quickly google, which often resulted in a startled “eh? OH!”. But going into the game as history novices, it wasn’t like we were constantly questioning things. The game’s explanations were relatively straight forward and nothing was left to the imagination.

The final thing to note about the game’s theme (more so the imagery) is that it didn’t make us feel uneasy. For a game about removing entrails or transplanting every other fluid, we never felt queasy from the cards. The justifications for cures however is a different story… but that just added to the fun! 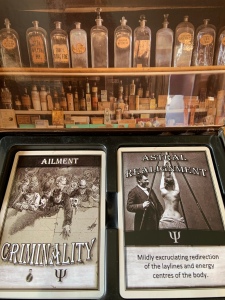 Not Every Doctor is a Winner…

Trust Me, I’m A Doctor is an example of a party game with a simple concept and a superb execution. But being a party game based on choices, it holds the trope all party games hold – bias. You have to approach the game with as little bias as possible. You’re all in competition, and just because one of the doctors is cuter than another one, it doesn’t mean their cure is any better. There needs to be a clear level of objectivity to the game. And with that, that may also mean you need to choose someone to be the winner.

Should you play the game as someone trying to be nice, you’ll make it so someone can’t win. Mathematically, should everyone get chosen in turn, the first player to go cannot win the game. If you’re playing a game where you get to your third card and everyone has two ailments won, you literally cannot win. And usually this is something we’d see as a huge flaw… but this is something we can forgive as it’s a party game. The winning isn’t a massive element, the engagement and laughs are.

Trust Me, I’m A Doctor is a great example of a party game with a simple concept and great execution. It boasts a wonderfully thematic theme with strong historic influence and an easy to approach presentation. It’s great fun to play, but it’s purely a party game. Throwing yourself into the role play and drama is part and parcel of the game, and this one wears that on its sleeve. Those of us hellbent on victory and decimating the competition won’t enjoy this as much as more casual players, but at the same time the social recluses of us may also struggle. However we implore you to have a good look at this one. For social engagement and great laughs, this one’s a cracking choice as a party game!