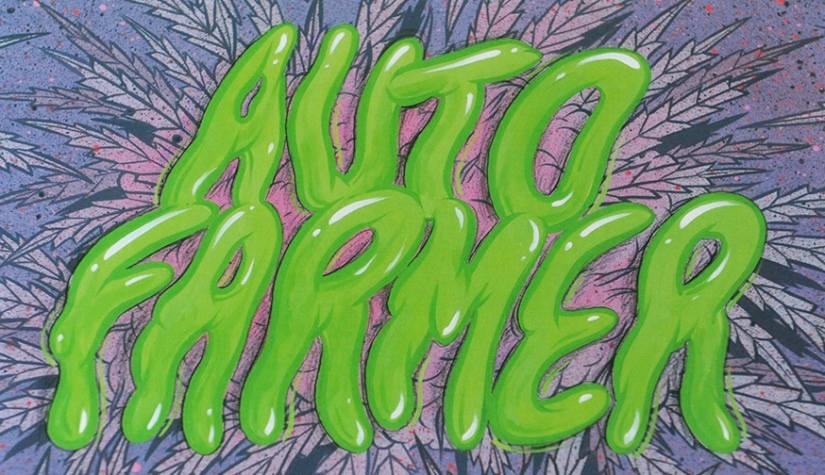 Gardening. As a youth I paid no attention to it and didn’t care for it. It wasn’t something I even thought was a hobby – you plant stuff and wait. Sounds fun, right? But then I had a go, and, surprisingly, it was the most monotonous thing I ever did. What’s weird though is that no one tells you how addictive it is, and I found that I was writing schedules to water the plants and buying plant food. (I had no idea plants ate food!) Something about that routine was really satisfying! AutoFarmer by Free Folk Industry is a competitive game all about gardening and plants… but of a much different sort than we’re used to… It’s a fast paced, take that game for 2-5 players!

This preview is wholly based on gameplay, art and theme. It is not a reflection of our opinions on the activities or associated produce of the theme.

All players take on the roles of farmers growing their produce. Players take turns each game being the first player and play as many games as there are players. Games are split into three rounds: growth, blooming and harvest. Players score during each round and earn points based on the weight of their plants’ produce. Whomever has the most cumulative points once all games are played, wins!

To set up, players each roll two dice, twice. This generates two numbers and determines the number of seeds (the higher numbers and number that germinate (the lower number). In example, if I roll a 7 and 10, I would take 10 seed cards and flip 7 to the plant side. Plants are worth 40 points by default, but this number can changes based on the cards played.

Starting with the first player, everyone takes turns to take three cards and play actions. They can play as many actions as they wish to, but cards can only be played during certain rounds – as indicated by the symbols at the bottom of a card. Whether a card is played to a plant or is discarded after use it shown in the top right. Before passing to the next player, the active player checks for any diseases in their garden to see if they spread or kill any plants. This always happens on the affected players turn to allow them to intervene or play cards to help themselves. Once all players have been, the active player moves the round card to the next one to signify the next phase of the game.

Players can play cards against any player, and the effects are generally instantaneous. There are no reaction cards, however negative effects only occur on the afflicted player’s turn, or at the end of the game. Once all players have completed all their turns in the three rounds, players discard any plants that still have diseases and count up their total points. If there are more games to play, the next player becomes the first player and play begins again. 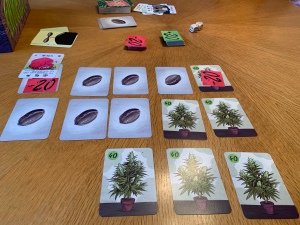 AutoFarmer is a great deal of fun! It’s unbelievable how enjoyable and easy to access the game is. There are some wonderfully unique ideas in the game that work well with one another, and the removal of reactions enables players to plot revenge instead of impulsively attack.

When we first played AutoFarmer, we played a two player head to head game and noticed something. Whomever is first player was at somewhat of a disadvantage. You’re stuck with diseases you get afflicted with and have to deal with a poor end game clean up. It’s unavoidable! But it works. Every player is first player at some point, and it means only one game is more likely to be of poorer quality.

What’s more is how quickly the game plays. We played a full two player game lightning fast. It was out the box, set up, played, and away within 30 minutes! Pushing that further, we taught the game and played a full three player game in 35 minutes! Now don’t go seeing this as a quick hit, on and off the table game. The fact we played games so quickly doesn’t account for the second, third and inevitable fourth full game we played! It was so easy to get our heads around and get into, and we found ourselves getting more and more competitive. It’s all lighthearted fun, but we craved victory!

Our only qualm card is the raid card. This removes all of another players’ plants not already harvested and happens in the final phase of a game. It’s a really evil card and it genuinely causes some reservations about its use. Were it to be a phase 2 card, a player could recover… but that’s just our two cents on the matter. It still works and it’s not like those affected are down and out completely! It just encourages more aggressive play! 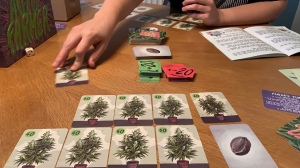 AutoFarmer’s art is incredibly unique. So much so that we genuinely can’t associate it to any board games we’ve played! It reminds me personally of VIZ (a satire comic for adults here in the UK). It’s got a sort of, almost unattractive despicableness to it without being repulsive. You can’t help but appreciate the beauty of its grotesque attributes! As for the cards’ components, everything makes complete sense. To say it’s wholly translated into English, everything makes sense and is explained really well. There weren’t any blurred grey areas to confuse bits and we got it and got on with it.

Balancing The Cards Out

As with many take that games, this one is heavy on the aggression. There are cards to steal, ruin, or just straight up kill plants. Whether you’re dropping mites or a mold on a plant, the effect is aggressive and it continues on and on until dealt with. If you don’t cure that disease, it spreads and affects everything… That said, the cards to combat these things aren’t as frequent as you’d like. You have two diseases, but one cure… which is the lesser of two evils? What should you do? Well, the answer is always clear. Don’t get mad, get even!

From game to game you’ll carry a bit of a taste for revenge with you. It’s all lighthearted, but they’ll undeniably know that you’re after them! Unfortunately it’s not risk reward as much as it’s risk rebuttal. If you do someone wrong, chances are they’ll have no choice but to get you back! And in a 3+ player game, it’s even more vicious! But what’s really great is the aftermath. You’ll count up your score, look at the decimated gardens on the table, and laugh!

We haven’t played a game yet with anyone turning sour, we just set up for the next game and got on. There’s no scope for that level of spite, the game plays too quickly! By the time you’ve exacted your vengeance to a satisfying degree, the game will be over and someone else will have inevitably won. The games about managing a garden and having fun, not running the rule of “an eye for an eye”.

Variance In The Seed?

The copy of AutoFarmer we received included the Strains expansion. This allows players to swap two of their plants for unique ones that may have greater produce, immunities, or other effects. To introduce this, players draw seeds and plants as normal, but swap out two of their plants and draw three Strains cards. They choose two to keep and discard the third. These plants have more desirable effects, but are still susceptible to theft and other negative effects as applicable.

The Strains expansions added a little bit more to the game and gave a new level of tactics to the competition. You now not only had new assets to maintain, but new ones to target. How players managed their plants originally was almost redundant, as the more coveted plants were available. It also added a tactical level of taking poorer variants to hide away. Should you take a low yield plant, people aren’t going to want to take that necessarily from you! They’re going to target the biggest and best! We found this expansion worked best with 3+ players, but genuinely enjoyed it at two and frequently integrated it into our games 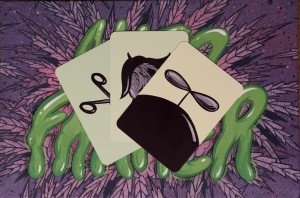 AutoFarmer has a very… interesting theme (as you can no doubt see). It’s something we were dubious about previewing even – saying we would happily and then having to do it were two different things. However, we cannot deny this game has a solid place on our shelf – despite its associations. We play AutoFarmer for the gameplay, the wonderful moments of getting got and getting back, for the tactical play of saving cards or targeting those with bountiful harvests. If you have reservations about the game on theme alone, we implore you to discard them. AutoFarmer is a stand out competitive game with superb gameplay and a wonderful amount of take that within it.

AutoFarmer is a great take-that game. It has everything a properly aggressive playing game needs, and balances out first player pains by running over a game per player. The cards never seem ridiculously overpowered and things can be managed or accounted for as necessary. Our only true gripe is the theme – were the theme in a different area of horticulture, it would have mass market appeal in our opinion. But as an adults’ take-that card game, it works well and is very engaging and enjoyable.

We really enjoyed AutoFarmer’s gameplay, and it will be a game we go back to when we need that aggressive play style. It’s a true take-that game, and that’s undeniably why we thought it was awesome!