The Kickstarter is LIVE! Check it out here!

13 Monsters, as you may already know, was a hit with us. It streamlined several mechanics into each other and made for a really enjoyable experience. If you want to read our whole review, check it out here!

Armed To The Teeth is the expansion the game didn’t need, but was incredibly welcomed. It adds in some extra elements into the game, balances out the Supernova ability, and gives players lots more options!

The copy we received is a prototype. This means that, despite its gorgeous visuals and superb component quality, things may be subject to change. All opinions expressed regarding this game are based wholly on this copy.

13 Monsters’ Armed To The Teeth expansion runs simultaneously with the game. There’s no moment the expansion isn’t part of the game and it can be utilised by players when on a roll!

To add the expansion, you need to take out the new player prompts, the three stacks of new tiles, the new dice, the Trall statue and the rule book. The three stacks of tiles contain armour, metal monster parts and offence and defence items. The new player prompt sheet contains the new abilities and opportunities to gain the aforementioned tiles. The dice are utilised by players at specific instances including some attacks, and for establishing which tiles to gain. Finally, the rule book goes through the new rules and abilities. Player set up is no different to normal.

Trall is a new, 14th monster that doesn’t count for any players but is beneficial to all. Anytime a player collects a new matching set, they gain Trall. He doesn’t count to monster numbers, but allows players to access Trall’s Craftsmanship. This is where you roll the new dice and count anvils. Anvil results will enable you to access the new tile types to enhance your monsters further with the armour, abilities, or metal monster sets.

These in turn also unlock extra abilities, which activate separately to the original abilities. Armed To The Teeth’s newly added abilities scale differently to the originals. These are now based on the number of metal components, weapon/shield combinations, and armour pieces. The abilities are set within the same moment of a player’s turn, but are unlocked through different combinations. 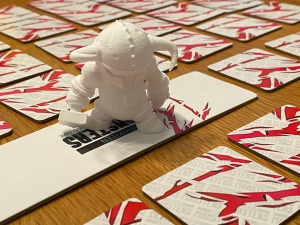 The final change is to combat. To take on an enemy monster set with armour attached, you must disarm it. This is done using the new dice again and whether it is removed is based on the number of shields and swords thrown by players. Should the aggressor succeed, the targeted piece loses its armour, meaning the set can be claimed on a successful attack. The other reason to target, or claim, armour is through their bonus effects. Some armour gives extra attack stats, some defence. The combinations chosen can enable monsters to be more focussed on specific purposes.

When we first read through the ins, outs, and additions of the expansion, we believed that Armed To The Teeth wasn’t needed. For us, 13 Monsters is a great game of streamlined mechanics, tying in odd mechanics and gorgeously hideous monstrosities in a tile matching, abomination battling game. However! And this is a huge but with a side of “hold the phone”! Armed To The Teeth is brilliant.

Armed To The Teeth is one of those beautifully wonderful expansions that can be tied in easily. No fuss, no extras, no mess. You get the stuff out, stick it on the table, and it’s integrated! It fits so neatly onto the edge of the game that it becomes part of the routine to utilise. Running the different elements of the normal game are simply spaced by your new choices. What’s more is that gaining a monster set enables you to take another turn, like normal, but also utilise Trall’s workshop!

We’ve got to take note of the glaring issue with an expansion being combined so easily. It’s added on to the side and fits perfectly, so much so that not using it won’t stop you playing. So there’s risk you won’t utilise it. There’s no prompt beyond running the routine of a turn to check for Trall or abilities. Take this as forewarning… if someone else is using the expansion, and you aren’t, you’re going to have a terrible time.

Armed To The Teeth’s arsenal of offensive and defensive items is varied and, as with the core game, illustrated beautifully. It’s more focussed on elements for the weapons and armour, though. A fire elemental shield, weapon and armour set genuinely look like they’re imbued with it. They breathe it and it’s a strong aesthetic. But looking good is only half the challenge! Managing to utilise the abilities the gear blesses you with is the tricky bit!

Some abilities have a cross over with that of the core game, and with good reason. All Seeing Eye is simply a fancier, armour based Prophet. Both enable a third tile to be flipped. But they can’t be used simultaneously. Using Prophet opens up scope to use the new abilities, but All Seeing Eye lets you use the classics. It means that abilities become more contextually applicable and tactical plays can become more prominent.

The abilities in all were wonderful and highly sought after by us as players. Having the ability to bring back the troublesome 13th Monster post Super Nova is excellent, as it means a second one can go off. (Only once per player, luckily!) The other element to the new abilities is how they activate. Removing the tiering system for all abilities means some can be utilised earlier. Oopsie Poopsie (yes, you read that right) is an early access ability from one armour and is perfect for those moments where you pick the wrong piece in a pinch! Also, removing both a sword and a shield from a monster can enable you to steal a loose Monster Set without confrontation, great for when you know you won’t win, but need those feet!

Armed To The Teeth undeniably puts more emphasis on combat and aggression, something we’d argue the core game needed. Don’t get us wrong at all, we thoroughly enjoyed 13 Monsters’ core experience. But it can be done without combat. And for a game about creating monsters and battling them, it seems odd. It’s not, and it works. What this expansion does though is throw new life into a simpler element of the game and give it more longevity and substance.

Of the three types of metal monster parts you can collect, the armour and weapons will encourage that aggression. We found armour was more of a convenience at first, but when you get into the real meat of the game, it’s a godsend. It keeps monster sets secure and provides a modifier when you’re the aggressor or defender. These are constant benefits for that beastie so long as the monster has it. Weapons, however, have a usage limit. Two uses and they’re gone, meaning that they’re finite. When used up, they’re added back into circulation at the bottom of the pile. Having both a sword and a shield gives its own benefits, but having a matching set is oh so much more powerful!

13 Monsters did combat well. It worked, and was fluid. Armed To The Teeth makes it meatier and far more satisfying. Again, it’s wholly optional, but with such tempting toys at your disposal, it’ll be hard to say no!

Armed To The Teeth is integrated into 13 Monsters without issue. It sits nicely at the side and enables you to do some not so nice things to your friends. It encourages the aggression that the core made optional and ensures you’ll want to utilise everything available. The art and component quality is consistent against the core, and the theme is enhanced beyond the original. It really emphasises the whole monster creation feel of everything – but with much more of a Frankenstein feel to it! So to ensure you’re able to maniacally laugh whilst screaming “it’s alive!”, check out the Kickstarter!