Have you ever tried to organise a party? Me neither. I’ve bore witness to the organisation of one though, and my goodness was it the most stressful escapade ever. Decorations, guests, food, drink… all things I’m happy to partake in, but the feng shui of getting it in order is beyond me! So what if there were a game about this chaos? It’d need to be adorable and great fun to counteract the need to follow a strict regime or checklists and timings. Bunny Party at Maple Valley by Evan’s Games is that adorable game of organising a party. It’s for 3-4 players and takes around 30 minutes to play.

Starting with the first player, all players Tidy a card. This requires them to either play a card next to the discard pile, or to give it to another player in exchange for a trade token. The cards next to the discard are then shuffled and placed onto it. Next, everyone chooses one villager of the five available to help them decorate. These villagers have useful, but contextually applicable effects which will improve your chances of getting the cards you need. Players then take turns to play cards and resolve their effects. These may be item cards or event cards, but their effects are easy to enact and understand. Then, players have the opportunity to trade cards in front of them by spending trade tokens. These can be beneficial to both players and help them manipulate who has the best chance of winning. Should any players still have cards at this point they play those too.

Once a round is over, the players return their visiting villager cards and the first player token is passed on. At the end of any round, if a player has five of either type of decoration, they win. However! The game is not as simple as “collect set, win game”, there’s some wonderfully unique differences here… Bunny Party at Maple Valley is a weird game in that, no one player can ever win. There is always two winners. The aim of the game is to collect sets of either moon or star themed decorations ready to start a party. As soon as a player has five of either at the end of a round, that player wins. However, if they have five stars, the player to their left also wins. Five moons means the player to the right also wins.

Bunny Party at Maple Valley is sickeningly sweet, gentle and kind whilst managing to maintain its feel of competition. It’s weird! You go in, ready to manipulate the opposition on either side to claim victory in some respect. You’re primed. You’re jacked. You’ve got this… and then you have a really lovely time and no one feels sour or bitter. How this game manages to ensure the pleasantries and fun without removing the cutthroat card plays is an enigma within itself. But it does it, and does so well!

Bunny Party at Maple Valley is a set collection game, through and through. Strip it down to its core mechanic, the driving force, and you’ve got just that. Now, we like set collection games a lot – they’re one of many group favourites – but that’s not the reason we enjoyed this particular one. On top of that intrinsic and integral core is layer upon layer of other, small things which tie together to make a big impact without ever diminishing the need for that collected set.

Adding The Pizzazz To Your Quaint Party

First off, the semi-cooperative element of the game. This game appears all fluffy, fun, cute and gentle with its lovely art style and king animals. They’re all going about their jobs and doing their things to make Maple Valley a nice place to be. But what’s underneath is closer to something seen in a “Real Housewives Of…” reality show. Underhanded dealings, manipulation, owing favours and challenging artistic flair. You need to either have you win, or someone adjacent win in a certain way. This minor element of which set they collect can change your entire focus on what you play, who to, and when. If that lovely little antelope to your right is collecting a set that helps their right, you nail them. No remorse. Punish them and give them awful clown paintings until they back down and support your endeavours.

The other strong link with overly Americanised reality shows about rich folk and their hosting abilities is the flaunting of one’s own influence. If you’re the one with the largest collected sets, you hold all the cards, metaphorically. Those adjacent players may have what you need in order to start the party. But they may also have what it takes to stop it, too. Through a little bit of social eloquence, and a smidgeon of cutthroat cattiness, you can play them off against one another and choose your co-victor. The flip side there? Play it too well and you’ll be over encumbered with ugly decor and spoilt food. The mighty do fall, and we’ve seen it happen in this game. It makes for some excellent talking points afterwards, but in the midst of it all its just fake smiles and backhanded compliments.

Introducing Yourself To The Neighbours

Next up is the wonderful use of asymmetry. You’ve all got to collect five of one set, that’s a given. But these cutesy little critters have specialties all of their own. They themselves are stronger at somethings than others, which they can use to give them the edge in specific situations. This may be as simple as gaining an extra trade token to start with, or having the ability to break ties in your favour for victory. Nothing ground breaking, but solid abilities nonetheless. However, some of these skills are pretty damn powerful and useful, and are therefore used once a game.

These bunny’s of Maple Valley clearly know their stuff, and their set of skills is invaluable! In example of the Computer Wiz who can play a card from the deck instead of his hand, or the Fortune Teller who can rearrange the four top cards of the deck, and who can forget Grandma? Like any stereotypical, nice old lady she’ll give a card to someone else from the deck. No doubt the favour will be expected to be returned. But it’s that asymmetry that makes the game different each play, and a unique experience. One method won’t work every time, and that ability will come in handy in a pinch!

And then there’s the visitors. Bunny Party at Maple Valley has the wonderful mechanic of effectively choosing an extra ability each round, meaning you can orient your choices around cashing in on that skill. One visitor is not used in each game, leaving five for players to choose from. These visitors have abilities that will win you favours, give you an advantage, or make people nervous. Particularly Abigail the Gossip Opossum. She’s a force to be reckoned with, as she counts as a decoration and results in the victory not being shared. You’d have to be really confident to invite her over, as it’ll get the table talking (and no doubt targeting you!).

I Bought You A Gift, It’ll Look Great On Your Mantelpiece!

Bunny Party at Maple Valley is a game with the slightest bit of take that within it. And it’s take that in the most literal sense of you take that card given to you. Because all cards are played at some point, giving someone something awful means you won’t be making friends. On the flip side, keeping it means you’re stuck with it. The Tidy phase allows you to reduce that clutter and get save someone’s fashionable reputation… but in the end it’s a competition, and that ugly heirloom will hopefully ruin their party!

Some item cards have continuous effects and make them quite powerful to have. They can be removed or gotten rid of, but they’re handy and dangerous all at the same time! Giving someone a dodgy clown picture will reduce their decorations by one, whereas the burst pipe will prevent you from starting the party whatsoever! Whereas giving presents results in them drawing a card, but that’s then pick of the lot. They’ll have to play it, and if you’ve been sneaky enough that too may ruin their chances of a lovely shindig.

Take that is a common mechanic among the games we love, but it’s not because we’re bad people. It’s the pressure you place the recipient under to deal with the new obstacles, and this game takes it quite seriously. You give them something which means they’ve got to work harder to win, or something which encourages them to win in your favour. How they react will undoubtedly determine the relationship you have as neighbours. Will it become a drama, or a budding friendship? Who knows. But by playing any card, someone will be unhappy. And that’s the beauty of it!

I Love What You’ve Done With The Place

The theme for Bunny Party at Maple Valley shouldn’t work. It just shouldn’t! You’ve got the contrast of semi-cooperative back stabbing and manipulation, coupled in with favouritism and take that, and adorable animals organising a get together. It’s basically yin and yang. But it works. It works oh so well! You’ll love the gentle, children’s story visuals and adorable theme. The animals just want a space party with some consistency, but no ones communicating to organise just one party. It’s clearly chaos in Maple Valley, with no one running the show. But hey, so long as those decorations are available that party’s going to happen. One way or another. 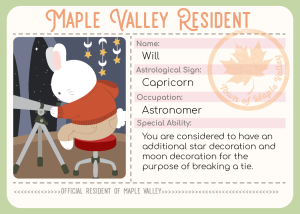 Bunny Party at Maple Valley is a delightfully fun game with gentle theme and cutthroat mechanics. With two winners, you have to aim to be at least one person’s friend, meaning you can’t take everyone down and need to be careful. The contrast of theme and mechanics result in quite a pleasant experience that we happily partook in again and again. Our only qualm with the game is the player count culling our numbers or requiring more than available. 3-4 is awkward, but can work and the game works well with these. I’d like to see scope for up to 5 personally to make it more viable for larger groups, but that’s me nitpicking. In all honesty I enjoyed the game thoroughly and will be watching closely on Kickstarter.