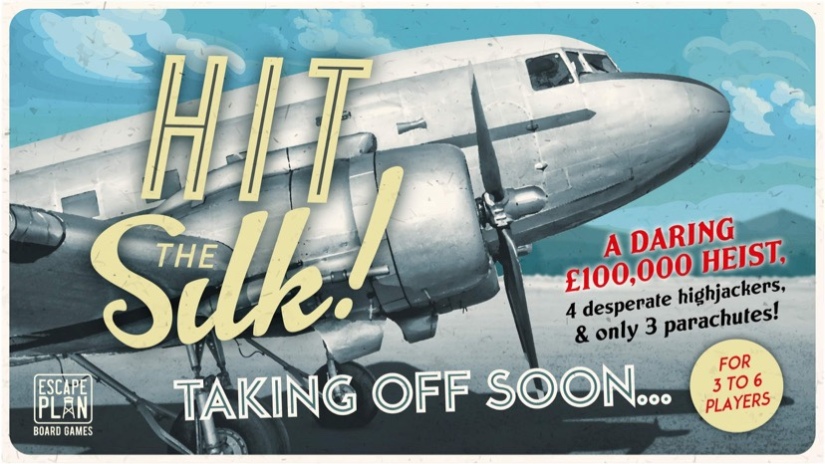 I love a good heist movie. The action, tension, genius plotting and endless motive changes. And because they generally go wrong and end up with the robbers heisting one another. They argue, bicker, and learn that the real heist were the friends they made along the way. Then they sail off into the sunset with some smug millionaire footing the bill. Cliches aside, there’s something about the anarchy before the escape and after the execution. The moment where it all goes wrong. Where being human is what ruins it for everyone. Hit The Silk by Escape Plan Board Games is that chaos. 4-6 of you heist a plane for money, only to learn that there’s not enough parachutes. It’s a bluffing, semi-cooperative, deception game that runs in about 30-45 minutes.

The copy we were sent was a pure prototype. Rule clarifications, component changes, and artwork are all subject to change.

Hit The Silk takes place on a plane that is going down. The players need to accumulate enough cash before jumping out. Where things get tricky is in the fact that there are never enough parachutes. Those left on the plane do get the chance to try to land it. Any players who escape with the necessary cash win, as do any players who manage to land the plane. Being killed, jumping without enough cash, or crashing the plane all result in a failure.

The game’s set up varies with player counts, and certain amounts of cards are removed for lower numbers.

To kick off, the deck is adjusted for the number of players and the plane’s lockbox is filled accordingly. Certain cards cannot be in the lockbox due to mechanical, thematic and gameplay reasons. Everyone is then dealt six cards, and discards two of them. The discard pile is played face up, and keys are always discarded to the bottom of the pile. The remaining undealt cards form a draw pile, and the laundry card deck is placed also. Finally, the altimeter is set to its initial height for the number of players. 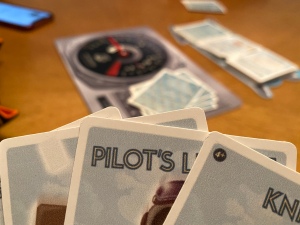 The aim of Hit The Silk is to accumulate an amount of cash between players who then need to jump with a parachute. However, because there are never enough parachutes, and you don’t necessarily need all players to attain the needed amount of money, players use cards to hinder one another.

On a turn, players can play cards from their hand to change the events within the game. These actions will enable them to gain new cards or prevent others from having an advantage. Most cards will have an altitude drop on them, which reduces the altimeter accordingly. There is no limit to the actions a player can take, and each player may discard X cards to draw new ones, based on the altimeter’s reading, once. The lower the altitude, the more cards would be discarded. In the event where a card is lost without gaining one, this would be filled with a flannel card from the laundry. These cards do nothing and have no value, but ensure players always have four cards in hand.

As the game progresses, the altimeter is reduced in value and certain events take place. Most notably, the opportunity to hit the silk and jump. Three players must agree on to jump under the circumstances that they have enough cash between them. There’s no point in jumping without the cash! Jumping results in the remaining players attempting to land the plane, whereas staying results in a big drop in altitude. At 3000ft, there is no more time to jump and all players must land the plane together.

What Can You Do?

The cards in Hit The Silk are designed to prevent advantage and keep everyone on their toes. These actions range from handcuffing players together, stealing or preventing theft, spying at another’s cards, trading cards, poisoning a player or shooting them! All the cards have resulting effects and won’t necessarily make you any friends, but are perfect if you want to slow the progress of those with parachutes.

Hit The Silk is very much Oceans Eleven meets Aeroplane. You’ll have all the greatest of intentions to make some big brained plays and elaborate tactics. And inevitably, it’ll all become a whacky, inconsistent mess of arguing, backstabbing, and selfishness! Anarchy around a coffee table. Then, before long, someone will be left behind to clean up the mess as everyone else makes a daring dive. It cannot be emphasised how fun this game is, and how easy it is to get lost in it all. You’d think you were going to get the cash after with how malicious you can be, it’s incredible!

Knowing your end goal on this is important, and it’s always easy to lose sight of in any social deduction game. You’ll get caught up in the moment. Someone did you wrong? REVENGE! Someone’s being shady? RETRIBUTION! Someone is minding their own business and going about their turn? UNACCEPTABLE! No matter which way you look at it, sooner or later you’ll end up taking someone down. The key element as to whether it helps you to do so or not is how lost you are within the theme.

The game’s cards allow you to do a lot of things to a lot of people. You’ll hinder, aid and annoy all within a turn and (hopefully) be all the better off for it. No amount of coyness or pacifism will allow you to go unscathed with any player count. People are going to poison, cuff, shoot and stab their way into a winning spot. After all, there are only three parachutes, and you’re the loose end to be tied up or left for dead. I personally found myself with a fondness for the poison card. The panic on the victim’s face as they can see the clock ticking down. At 5000ft, they’re as good as dead. The antidote is out of their reach and they’re going to plead endlessly! Or, being sly, will cuff themselves to someone in a good position. You can’t share a parachute, and galling a corpse at terminal velocity won’t do them any favours either. It spices the game up no end!

Hit The Silk has a way of making you feel the need to get nasty, which is what the main focus of the game is. You’re robbers fighting over cash and parachutes. If you weren’t at each other’s throats, something would be going wrong! Where the caution lies is in making enemies for the sake of making enemies. Shooting someone makes for some great comedic tension, but doing so without just cause will only hinder you in terms of allies. As is the same with the poison. You’ve got to avoid getting got, but purposefully get others. Got it?

Theme is an important thing in any game for us, but with social deduction it goes beyond just the aesthetics. You’ve got to feel like you’re in the game, get lost in the intricacies and deceptions, actually care about your own goals! Luckily, Hit The Silk manages to achieve both the visual and thematics to a great standard! Although we were sent a prototype copy of the game, the chosen illustrations and wordings were superb. The cards interacted really well and the whole game worked excellently. The explanations on the cards were great and ensured that there wasn’t the need to detach from the immersion to rule check or clarify.

There’s something quite wonderful in the visual countdown of the plane’s descent. As the altimeter’s reading diminishes, so too do the pleasantries and tactful approaches. But what we found drove these engrossing feelings the most were the cards and their impact on the planets altitude. Performing kung fu doesn’t usually cause you to plummet 500 feet, but having it do so makes it quite nerve wracking to use. It’s superb how easily you’ll take these actions for granted initially, but as time goes on they’ll be seen as desperate moves to gain cash and a lifeline. It also makes that moment of tense discussion all the more tricky. You’ll all argue your case for the need to jump, trying to cling to the cash and the parachutes, but inevitably will suffer for not jumping. And those big drops from choosing not to abandon the plane are the ones that really make you panic!

Hit The Silk is a game we’d argue becomes a borderline role playing game. It goes beyond the social deduction and discussion and you almost feel like you will need to land the plane if you’re left alone. Like you’ll actually lose something if your character dies of poison. It’s nail biting stuff, and it’s that captivating theme and engagement that we loved.

Over Your Baggage Allowance

It’s important in any game to be objective and not carry baggage from session to session. Here, it’s paramount. It’s a common issue among any social games where you can betray, and betraying out of spite makes for a fool’s errand. All you’ll do is hinder yourself and make enemies. It’s a tricky thing to detach from as it’s often what makes you want to play the game: the chance to get them back. However, we found that outright poisoning someone because they did the same to you a few games ago meant there was a vendetta going on. Funny as it was, it prevented us from ever winning as it became three people fighting over cash whilst two fought over who was the worse friend.

It’s no downside to the game, as it’s something we feel all social deduction and semi-cooperative games suffer from, but it’s worth bearing in mind when plummeting to the ground at high speeds.

Hit The Silk is so much more than its mechanics. It’s semi-cooperative social deduction, yeah no arguments. You may be on someone’s side, you may be trying to work out the contents of their hand. It fits the bill really well. But to label it as just those things is to sell the game far too short. This is as close to a roleplaying game as you can get without being one. You will genuinely feel like you’re on that plane, fighting tooth and nail to get a parachute and the cash. Suffering at the hands of your co-conspirators really feels like being held back, and exacting the revenge or watching them escape without you brings real feelings forth. It’s weird, but you do get lost in the whole heist at high altitudes. It oozes theme and presence! We thoroughly enjoyed Hit The Silk and believe that, if you’re someone with a knack for arguing, deceiving and being an all round bad person, or you just enjoy semi cooperative games, this is right up your street!